NEW BHAJANS
The following poems are devotional songs
Sant Ajaib Singh Ji wrote to Masters Sawan and Kirpal.
They can be found in the 1996 Edition of the Bhajan Book. 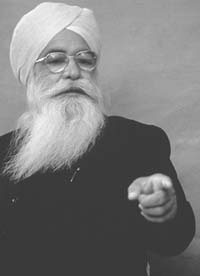 This bhajan was sung regularly in the Bombay programs by an Indian Dear One.
Thanks to Raaj Kumar Bagga (Pappu) for sending the tranliteration and translation.

Thanks to Raj Kumar Bagga for translating this Bhajan into english.
Pappu Ji indicates that this bhajan is from Kabir's Shabdavali,
a book which Beloved Sant Ji used to take the hymns from to comment upon them in the satsangs.
This Bhajan was often sung in the Bombay programs by an Indian dear one.