Message to the Sangat 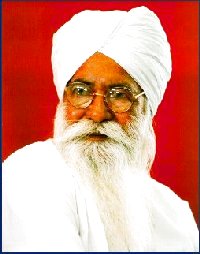 Understand the Feelings of My Heart,

Dear children of true Lords Hazur Sawan and Kirpal, in the Holy Name and in the true and pure remembrance of my great Master, many greetings to all of you on the happy occasion of the New Year. I wish that the new year may be filled with all the happiness for all of you, and you may always be on the path of progress. Dear Ones, all the rishis and munis, Masters and prophets, in their own times and in their own languages and words have warned us, have cautioned us, that we do not know when and from where the hawk of death may come and snatch us away. He doesn't care if one is big or small, woman or man, rich or poor, white or black, whether one is from the east or the west. Once he comes he cannot be postponed. He doesn't fear anyone. He does not spare anyone. He does not give any concession to anyone. In fact he is very punctual and after coming at the exact time he shows his face. He takes our life away with him while we are still crying, screaming and pleading. It is said in Gurbani, "Neither any king nor any lord remains, nor any pauper or fakir, everyone goes as per his turn, no one consoles anyone."

In His satsangs, Supreme Father Kirpal Singh Ji, while mentioning death, used to recite this couplet in Urdu, "No one is aware of his death, no one knows about one moment but is collecting things for a century." It means that we, the forgetful jivas, have forgotten death; and forgetting it we are collecting the materials for the centuries, even though we do not know whether the next breath will come or not. True Lord Sawan used to say that the amazing thing is that we ourselves carry our relatives and friends to the cremation ground, consign them to the fire, but we have never made our cunning and foolish mind realize and understand that such a day has to come to us also; and one day, all of a sudden, we will have to leave the market of this world. We are not aware of that moment. Gurbani says, "Open your eyes and see where your friends and brothers are, one is going, one will go, everyone goes in his turn." Sufi Saint Farid Sahib says, "The bones break and one feels pain at the time of death. Poor soul is taken out by breaking the bones." Kabir Sahib explains that when the pranas are separated from the body, the ghosts call him near, no one keeps him even for half a moment. He is thrown out of the home. He has also written, "One's wife, whom one loved so much and who always lived with him, even she runs away saying "ghost, ghost" when the hansa, the soul, abandons the body." Bhagat Nam Dev Ji has drawn the picture of this moment like this; he says, "Duryodhan and his hundred brothers used to say, 'mine, mine'. Their kingdom extended to a long distance. But when they died not even the vultures ate their bodies. Ravana was very mighty. His kingdom of Lanka was made of gold and at his door the elephants were tied, but in one moment everything became someone else's."

The words of the Saints are very clear. They don't leave any illusion. Guru Nanak Sahib has said, "O dear ones, don't think that the death will come after asking the astrologer the appropriate date and time." He has said that the death does not ask for the auspicious occasion, neither does it ask for the date and day. He has bundled one up. He is bundling up another and all will be beaten up. He even made it clear that do not think that the death stings only the poor ones and spares the kings and the emperors. No brothers, his sting is the same for all. We have seen the sultans being reduced to ashes. Nanak says, "everyone goes breaking the love with the falsehood".

So dear children, as I send you the greetings with much happiness and enthusiasm, I also, in much emphatic words, and with hearty feeling and love, want to tell you that come to senses and work with wisdom. Wake up from the deep slumber of attachment, Maya, and ignorance. Open up your eyes, understand the truth, recognize death as the truth and life as false. Collect that wealth which may help at the end time and which may go with us while departing from this world.

As you all know, all the Saints have told us the importance of the human body. They have said that only in this body can we meet with Lord Almighty. The other bodies have not been given this privilege. Kabir Sahib has explained the glory of the human birth and has tried to explain to us the work which is the most important work and which cannot be done in any other body by saying this, "The body which is craved for even by the gods is the body through which one can devote himself to God Almighty. Remember God Almighty, do not forget, as this is the only advantage you can take of this human birth."

Guru Arjan Dev Ji says, "The best body among the eighty-four lakhs of creation is the human body. God Almighty has given it the glory. He who misses on this step comes and goes and suffers the miseries." At another place Guru Sahib says, "You have got the human body. This is the only opportunity you have to meet with Lord Almighty. All other works are of no use. Meeting with Sadh Sangat meditate only upon Naam."

Dear children, all this I always tell you in the satsangs. But today I am repeating this in more powerful words so that you may listen to this with much attention. Understand it and start following from today itself. Dear ones, understand the feelings of my heart and appreciate it. Make my words part of your life. Devote more and more time in meditation so I may get some comfort, I may get helped in performing the duty which my great Master has given to me. May the burden be lessened and may you receive the grace and pleasure of both the great Masters.

Dear ones, this time will not come again. Once you lose this you will repent and cry. What more can I say to make you understand. Listen to the plea which is coming out from the depth of my heart. Understand me and from today itself, or rather from this moment on, apply yourself to Bhajan and Simran with all your strength. If our earnings are pure, our life clean, and if we have faith in the Master, our meditation will flourish soon. So come, let us attack and march towards the Court of the Master and earn His pleasure and make this life and the life beyond worth it.

The wiper of your shoes,

(This message was read in the original language to the Indian Sangat by Mr. Oberoi, in the presence of the Master, at the Satsang He gave on the evening of His arrival in Bombay, on Monday January 6, 1997; it was then translated and read out by Pappu at the first Westerners Satsang, on Wednesday January 8, 1997)